Why not just install a program called Parallels on your Mac, then install and run windows as a virtual machine within your mac. You can then install WoWs in windows on your mac and play it just like running it on Windows. We use it at work all the time to run all sorts of windows only apps and it works well. When the vm is run it runs Windows in our case Windows 7 perfectly as if it were a standalone Windows PC. It's as easy as pie to do and uses your mac hardware resources quite well, and you can even allocate how much RAM you want to assign to the VM.

I don't use mac so I don't know how it works there, but doesn't it ask where you want your game installed? If I could solve my problem this way, I would not ask for it. The problem is, I think, that I have to use the wrapper to be able to execute the classic Windows ". I was able to download just the drivers from their sites and installed them.

Set the aside and ready to install but not yet. But now It was always created before going into VirtualBox and VirtualBox identified it correctly too. I had to reformat again and reinstall the bootcamp drivers from the Mac side again. So I reformatted and redownloaded to the USB. Took longer than the Windows install. Lol Then Windows had no problem.

My explanation of the Bootcamp USB wasnt quite right, but it is explained below in my post on January 26, 4: Thank you for the tutorial Tom. I need help with the name of my SSD. I still need to get my bootcamp drivers loaded to my newly booted Windows system. I formatted the USB at the start of this process exactly as the tutorial said: Just now Windows would not recognize the file system on the USB and kept asking to format it.

This may be due to the more recent OS X versions. Lucky me. I noticed it added 32 to the end. It automatically makes it a MBR by default, so there is no setting for that. Then, I went back to my MacOS and it sees and writes to it no problem.


Crossing my fingers. I have some important answers to many problems below that went unanswered that I will provide, so that any new readers of this tutorial can be helped through those things if they run into them. Followed all instructions. Windows installed to my USB3. When I star with option pressed only mu macos drive shows. Is this a Mojave issue? I just finished mine on a MacBook Air with Mojave.

The key to having it show is to make sure that EFI partition remains there when you install windows. You will see it when the Windows installer asks which drive to install to. My reply to the comment just below Jason explains all that and how it impacts opt-boot.

Hope it helps! I have followed your walk through x3 now and when I go to reboot after the win install and hold the option button down, I only get my Mac HDD. So I boot up my Mac and go to Startup. The Win external drive is there and I select it and then restart forcing it to boot of the Win external drive.

Any ideas? If my memory serves me correct, I believe it has to do with the formatting of the SSD, of which I ran into every problem with mine. You do this step when you are creating the virtual machine inside VirtualBox. I did it right after I selected the existing virtual hard disk file. You go into settings and select EFT there.

I think in the System tab, but it could be the General tab. There were tons of reboots for me, so kind of a headache. I went straight through from the beginning to end in about 40 mins. After four days. It sounds more cumbersome than it really is. Goes much faster each subsequent time. My notes on change required are listed here: I believe he covers the EFI with pictures too. Really great work on his part. I also have some additions to what he shares coming soon.

In the meantime leave a post with any questions. 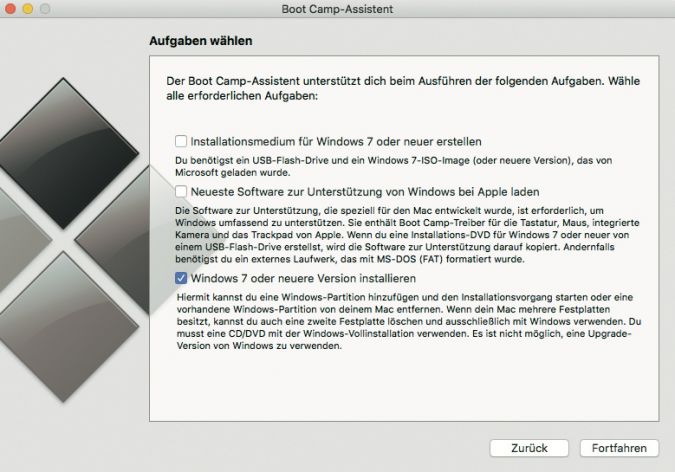 Any idea what i did wrong? I have the same issue as Laura. The bootcamp. Please can you help me? Remove that file, and try that command again without quotes.

I created the bootcamp. What I am missing?? Same thing happened to me. After you select all files from the drop down menu, you will be able to select it. So I get all the way up to the installing from the virtual box part.

I was able to get it all set up with a combination of tips from comments and the guide. Anybody than can help? I am able to install the windows files onto the external HDD, however, when I try to boot from the drive after shutting VirtualBox down before Windows is able to restart , I get a blue screen of death every time Windows tries to load, which then makes my computer restart. Not sure what is wrong?? Any ideas or help? I was having the same issue when attempting to install the October release of Windows 10 Home, but found I could successfully install the April release.

Windows10 is successfully running through the VM but when I restart my computer and hold down options the only option I am given is to select the mac startup disk and my wifi network. Early thanks. I did everything listed here and everything worked fine.

However when I restarted my macbook and went to the Startup, only my Mac drive showed up. Has anyone else come upon the problem that the April 18 Windows 10 update will not install on an external drive? Thanks for the great step-by-step. I had to eject the external drive remain plugged in and eject and actually unplug the external drive a bunch of times until I was able create the virtual environment using the bootcamp. In other words, it took several of tries to make the bootcamp. From then on it was clear sailing. Hey Louie, Just wanted to know whether after installing W10 on your external drive you are still able to use it to store files in it like any other external drive.